Being OK with lower-paying jobs if they make you feel good? 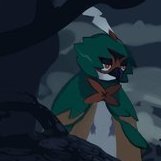